0 Composition, English 7:02 PM
A+ A-
Print Email
Write a short composition expressing your idea about "Globalization".

Globalization has become a buzz word in the new era of international relations. It is virtually a process of expanding trade and commerce all over the world, It aims at creating a border less and open market. It aims at removing all the barriers of entering goods and products from industrially developed countries. But we can see that it has a far reaching impact on many aspects of life. With the development of high technological communication media and rapid transportation facilities, the whole world has come closer and nearer. We can now learn in an instant what is happening in the farthest corner of the world and travel in any country within the shortest possible time. Countries of the world are now like families in a village which is known as ‘Global Village’. If one country is in distress, others can immediately come to its help.

Actually it paves the way to lasting poverty so that the capitalists can continue to use cheap labour of the poor countries. The exploited and impoverished workers of the developing countries can not be able to compete with powerful capitalism. As a result, the gap between the
rich and the poor countries is ever widening. 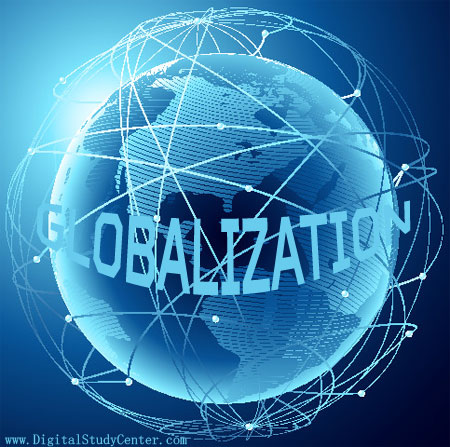 Although globalization is mainly related with business, trade and international relations, its impact is being felt in other aspects of life too. Satellite television channels and the internet are bringing all sorts of different customs and behaviour into our drawing room. Under the
influence of globalization, global cultures are steadily getting integrated with local culture’s. Different cultures are constantly interacting. As an independent nation, we have our own traditional social values, beliefs and attitudes. But in the globalizing process, many social customs and beliefs are intruding on our traditional values, beliefs and cultures. This is playing a great and profound influence on our young generation in particular.

The intrusion of foreign culture is seen by many people as an assault or aggression to our national cultural identity. The industrially developed countries of the world are thus having benefits from globalization for selling their products in the international market. At the same time, they are purchasing workers from the underdeveloped countries at cheaper rate. The developed’ countries are controlling the international trade and business in the name of globalization.