0 Composition, English 10:56 PM
A+ A-
Print Email
Write a short composition on "Floods In Bangladesh".

Flood is a natural calamity. It is almost an annual affair in Bangladesh. Bangladesh suffers from flood almost every year.

Flood is mainly caused by heavy showers of rain. Rivers and canals can not carry the rain water to the sea rapidly. So there is a sudden Increase of water in the rivers and canals which overflow their banks and cause flood. Floods also may be caused by in the melting of snow in the mountains. Many of our rivers are silted and cannot contain much water. During the rainy season heavy rainfall and sudden rush of water from the mountains also cause flood. Almost all the rivers of Bangladesh originated in India. India controls the flow of these rivers which very frequently creates flood.

Farakka Barrage in India is now one of the main causes of flood in Bangladesh. Bangladesh has to take an alternative means to control flood. It can be done by building dams and embankments in the low lying areas and by excavating canals to preserve water for the dry season. 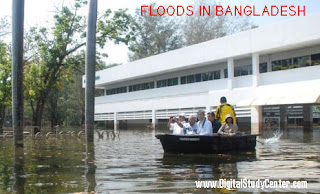 Flood causes serious devastation. Crops are badly damaged. trees are uprooted. It washes away our village and towns. Streets. roads and even peoples houses go under water. People can not go from one place to another. Sometimes flood causes river erosion for which many people become homeless and shelterless. The sufferings of people and the domestic animals are beyond description. Trade and commerce comes to a stagnant position. After-effects of flood are more serious. Cholera, typhoid. dysentery and diarrhea break out in an epidemic form. There is scarcity of pure drinking water. Many people cite of starvation. The affected areas become muddled with filth and dirt. The road communication is disrupted. This creates an adverse impact on economy.

Flood has some good effects too. The silt caused by flood water makes the land fertile. It washes away filth and dirt from the houses, lands and our surroundings. People are blessed with increased production of food and other crops. because the fertility of land increases.

If we can not check the huge loss that flood causes to our country every year. our all efforts for development will go in vain. So we must find out effective and permanent measures for the prevention of flood.