0 English, Grammar 6:32 PM
A+ A-
Print Email
31. “Follow my example,” she said as we shook hands, “and never eat more than one thing for luncheon.” “I'll do better than that,” I retorted “I'll eat nothing at dinner tonight.” “Humorist!” she cried gaily, jumping into a cab.

Answer:  As we shook hands she advised me to follow her example and never to eat more than one thing for luncheon. I retorted that I would do better than that and added that I would eat nothing at dinner that night. Jumping into a cab, she cried gaily and commented that I was a humorist.

32. “Why you are putting up the food in your pocket, Sir?” asked the noble man. “I am doing the right thing. My dress deserves the rich dishes,” replied Sheikh Saadi. “Please tell me clearly what you mean to say?” said the noble man.

33. A hawker said to me, “Do you want any newspaper?” “I have all types of news of news magazines.” “Please take one.” The customer said, “I want a weekly magazine named The Daily Star.”

Answer:  A hawker asked me if I wanted any newspaper and said that he had all types of news magazines and requested to take one. I said that I wanted a weekly magazine named The Daily Star.
34. My sister said to me, “Why are you reading this hour? Don't you think that it is a time of prayer? Let us go out for a walk after saying prayer.” “Yes, I agree with you,” said I.

Answer: My sister asked me why I was reading that hour. She again asked if I did not think that it was time of prayer. She proposed to me that we should go out for a walk after saying prayer. I replied in the affirmative and said that I agreed with her.

35. “I came to Dhaka this afternoon. I sent you a massage before starting from home” Nazneen said. “Did you receive it in time?” she asked. “No, I did not receive” I replied.

Answer:  Nazneen said to me that she had gone to Dhaka that afternoon. She added that she had sent me a message before starting from home. She asked me if I had received it in time. I replied in the negative that I had not received it. 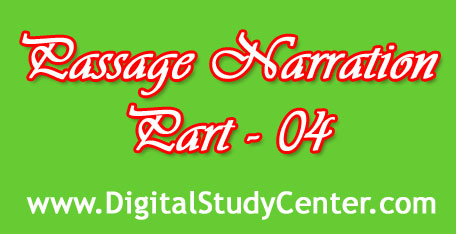 36. “My sons listen to me. A great treasure lies hidden in the land. I am going to leave it to you.” “How'll we find it?” said the sons. “You must dig the land for it” said the old man.

Answer:  The old man told his sons to listen to him and added that a great treasure lay hidden in the land. He further added that he was going to leave it to them. The sons asked him how they would find it. The old man replied that they had to dig the land for it.

Answer: The lion roared and said how dare he woke him up and said that he would kill him for that. The mouse cried and requested to let him go. It further said that he had not meant to wake him up.

38. The class teacher of class XII said to the students, “Do you like to go for study tour?” “Yes said all the students. Then he said, “Take permission of your parents.” One of the students said, “Let us go to Cox's Bazar.” The most experienced age-old teacher said, “May your journey be safe and sound.”

Answer:  The class teacher of class XII asked the students if they liked to go for study tour. All the students replied in the affirmative. Then he (T) advised to take permission of their parents. One of the students proposed that they should go to Cox's Bazar. The most experienced age-old teacher wished that their journey might be safe and sound.

40. Rafiq said to his English teacher, “Sir, I want to improve my English. How can I do that? Can you help me?” “Don't worry, I will help you.” said the teacher. “Thank you, sir,” said Rafiq. “Give emphasis on all the four skills of language namely listening, speaking, reading and writing,” said the teacher.

Answer: Rafiq respectfully told his English teacher that he wanted to improve his English. He (s) then asked him how he could do that. He (s) further asked if he could help him. The teacher told him not to worry and he would help him. Rafiq respectfully thanked him. The teacher advised him to give emphasis on all the four skills of language namely listening, speaking, reading and writing.