Introduction: There are some days in the history of a nation which are remembered and observed with due respect. The 21st February is such a day in the history of our national life. On this day the nation shows respect to the language martyrs. Every year we remember this day with respect. The day is declared as the government holiday. On this day national flag is hoisted at half mast. Meetings and symposiums are held all over the country. Every Shahid Miner is covered with flowers and garland. The history of Banglees is not simple. We had to struggle to achieve state language as mother tongue. There is only a sate in the world which had to struggle to achieve state language as mother tongue. It is Bangladesh. 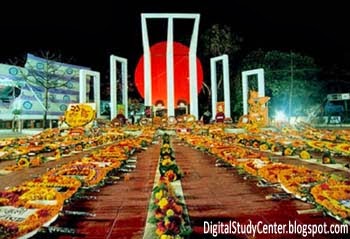 The Happenings in 21st February: 21st February is very remarkable in our history. Section 144 was declared in Dhaka but the students of Dhaka University came out in the street avoiding section 144 and many common people joined with them. When the procession advanced towards the present Shahid Minar, the poline fired and Rafiq, Salam, Jabbar and Barkat lost their lives. Then the government became afraid and was compelled to accept Bangla as a state language. It was a glorious victory and from then, the 21st February is observed every year to show respect for those heroic martyrs.

Celebration: The day begins with gun shorts and people wake up early in the morning on that day. A few boys and students do not sleep at night because they go to the Shaheed Minar at 12 p.m. Most people but on (wear) fine dress but a few boys and students put on Punjabis and trousers. Everybody holds a black badge as the symbol os mourning on their clothes. They walk to the Shahid Minar bare footed to show respect for the martyrs. After going there, they offer different kinds of flowers and flower garlands on the altar of the Shaheed Minar with great respect. They pray to Allah for the salvation of the martyr’s souls. Different social and cultural organizations and political parties bring out processing, hold meetings and arrange cultural programmes for observing the day. The national flag is kept half-mast on this day. It is government holiday. Bangladesh Beter and various TV channels broadcast special programmes on this occasion. Rich foods are offered to the jailors, orphans and the patients of the hospitals.