0 English, Grammar 2:54 PM
A+ A-
Print Email
Noun: A Noun is a word used as the name of a person, place or thing. For example: Jack, America, Titanic, Sun, Lion etc.

N.B: The word thing is used to mean anything that we can think of.

1. Concrete Noun: A Concrete noun is the name of something which has physical existence and can be perceived through senses, that means, it can be seen, touched or tasted. For example: Goat, Book, Gold, Air etc are Concrete Noun.

1. a) Common Noun: A Common noun is one which common to each member of a class of persons or things. For example: River, Flower, Poet, Planet Dress etc are Common Noun.

b) Proper Noun: A Proper noun is the name of a particular person, thing, place or any other thing. Note that, Proper Nouns are always written with a capital letter at the beginning. For example: Albert, Titanic, America, Quran etc are Proper Noun. 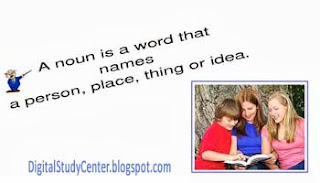 c) Collective Noun: A Collective noun is the name of a group or collection of persons or things of the same kind of as one undivided whole. For example: Band, Jury, Crowd, Team, Fleet, Navy etc are Collective Noun.

d) Material Noun: A Material noun is a name which indicates a matter or substance as a mass and does not indicate any part or number of it. For example: Gold, Iron, Diamond, Salt etc are Material Noun.

2. Abstract Noun: Abstract Noun is that noun which indicates some abstract idea or quality which has no physical existence and cannot be touched, smelt, heard or perceived through the sense; but can only be imagined. For example: honesty, boyhood, justice, heroism etc are Abstract Noun.

Another classification of nouns is whether they are “Countable” or “Uncountable”.


a) Countable Noun: A Countable noun is the name of anything which can be counted by number. For example: flower, child, book, pen, star etc.

b) Uncountable Noun: An Uncountable Noun is the name of anything that cannot be counted by numbers and may be measured by some other units only. For example: Water, salt, honesty, air, beauty etc.